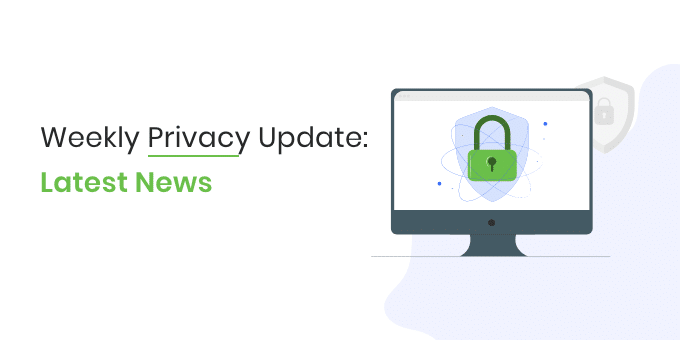 It has been an interesting week in the data protection world. Lawsuits, verdicts, changes in privacy stances; a lot has happened this week. The article contains weekly privacy update.

Here are the top 3 weekly privacy update that you should know of.

The highlight of the past week has to be that the European Court of Justice voids data-sharing pact with the U.S. in the Facebook privacy case. This has been an ongoing legal battle since 2013. The case argued that under the Edward Snowden case USA lacked the necessary data protection framework to facilitate the compliance of EU’s data protection requirements and legal thresholds.

There was little or no protection from state surveillance which in the case for EU’s citizens can be seen as an infringement of their privacy rights. According to the court’s rulings on 16th July 2020, companies looking to move European users’ data abroad, will have to ensure an equivalent level of protection to the strict European data laws. Find out here.

Another hot story of the week has been that Google faces lawsuit over tracking in apps. Even when users opted out. This means that the company has allegedly been using customer’s data. Such as their location and activity even when the user’s explicitly told Google to not use it.

Despite the opting out, the practice has seemingly gone on. Class action lawsuit for Google? Not the first of its kind though. When will Google learn though? No one really knows. Read more to find out

Fitbit wearable intelligence gear and Google’s acquisition of it has been in data privacy news for a very long time. Google has finally come to the conclusion of agreeing to refrain from using any of the marketing intel collected by FitBit before it was acquired by Google. This is likely to mean newer consent information. Also greater transparency if Google is to continue the use and promulgation of its marketing in the UK after this acquisition. Read the details here.