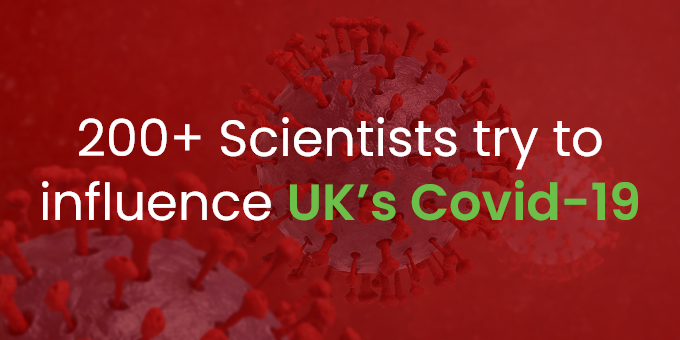 In an open letter, about 229 specialists from varying fields of mathematics to genetics suggest that the UK’s current approach will put the NHS under added burden during this fragile time and “risk many more lives than necessary”.

The signatories quote and comment on Sir Patrick Vallance, the government’s chief scientific adviser, and his management on the spread of the infection. The Department of Health said Sir Patrick’s is being widely misunderstood.

The letter was published days ago when the death toll was only 29. It has multiplied since. The government’s SAGE panel (the scientific advisory group for emergencies) advised household isolation is going to be required immediately.

On the matter, Sir Patrick and the UK’s chief medical adviser, Prof Chris Whitty, announced that they intend to publish the computer models on which their strategy is based.

The UK’s approach has been different from Italy, Poland and France. But, the population can not keep working in office environments and head to institutes to further endanger their health as well as others’.

The letter suggested that the spread can be limited, and even slowed down by reducing the multiplication to thousands in a few days if all activity is limited to social isolation. The population is forced to deal with a “herd immunity” at the moment. Whereby at-risk individuals are protected from infection because others have stronger immune systems.

According to Birmingham University’s Prof Willem van Schaik, this herd immunity notion means that at least 36 million people will need to be infected and recover.

And that can mean tens of thousands of deaths. During this time, at any point a quick lockdown can be in effect should the social and law enforcement go out of hand. Businesses will either shut down for 4 months then or they will shift to home-based work as the letter suggested.

All businesses that have the foresight should train their staff immediately to deal with new systems. Train your staff, do it quick. The staff eTraining is a great way to ensure that you are not faced with legal issues during this phase.

Sir Patrick has said to this that “Our awareness of the likely levels of immunity in the country over the coming months will ensure our planning and response is as accurate and effective as possible.”

According to these 200+ scientists “radical behavior change” maybe “much better” to “save very large numbers of lives”.

There is a second letter called to address the “behavioral fatigue” of the government, what will it mean for your business? Prepare now to handle the worse.